Firstly Wimbledon, then Cincinnati, and now the US Open. Being a part of Team Djokovic is an absolute honor, and working alongside Marian Vajda and Uli Badio to bring the best out of Novak has taken my coaching to a new level.

I want to pass along five lessons from the US Open to help players and coaches understand and learn from key areas of Novak’s game.

When we look at Novak Djokovic, we marvel at his ridiculous elasticity, the strength of his backhand, the deep returns, and the clutch serving.

When we look at Djokovic, we see the prototype of the modern player. He is the best of the best, and has been for some time.

But in order to fully appreciate Nole, the best place to understand him is not to look at him at all – it’s actually better to look at the guy standing on the other side of the net, and see him performing poorly.

Djokovic plays great, and he also makes you play bad.

That same dynamic played out for two weeks at the 2018 US Open as well. Our eyes are instantly drawn to Novak and his amazing level of play. But next time you get the chance to watch Novak compete, look to the other side of the court for a while. Just watch the opponent. Watch how little time they enjoy in a baseline rally. Watch them trying to “red-line” their tactics in order to succeed. For example, Novak won 111 points in the final against Juan Martin Del Potro. Fifty three of those points came from a Del Potro forehand error – which is his most potent shot!

It’s not all about you (or Novak) going to the court to play an awesome level of tennis. It’s much easier (and more repeatable) to make the opponent play bad. Make them struggle. Hit the ball where they don’t want it. Put the opponent first in your mind…

Here’s a link to the Djokovic Effect Story

And to my ATP review of the US Open Final

2. Be An All-Court Player

We like to put labels on players to better understand their playing style. For example, Pat Rafter is a serve and volleyer. David Ferrer is a counter-puncher. Roger Federer is an all-court player. Juan Martin Del Potro is a power baseliner.

What is Novak’s label?

The one I hear the most is aggressive baseliner.

Novak came to the net 37 times in three sets in the final. Del Potro came in 17.

These are the winners Novak hit in the final.

Novak IS an all-court player. He absolutely looks to come forward off a short ball. Being proficient at the front of the court AND the back of the court taps into the superior winning percentage at the net. Here’s the tournament totals from the 2018 US Open.

Yes, you should find a style of play that suits your game and develop it. And yes, the net has always been, and will always be, a great place to play as well.

Go to the practice court and try and make 10 second serves in a row (that’s the ATP Tour average). Put out targets all over the service box. Put a line two racket lengths inside the service line and make it 20 times between that line and the service line.

When working on 2nd serve returns, play big down the middle. That’s your primary target. They start spreading the court.

Hitting winners is a tough thing to do in a match. Here’s the break down between winners and errors in New York.

Here’s a good rule of thumb – only look to pull the trigger (go for a winner) one time in a point. Make balls, make the opponent uncomfortable, and elicit a short ball that you can really attack. Players at lower levels go for two or three winners in the same point. Too risky. They also like to go for winners when they are defense. Roll the dice. All or nothing.

Below is the breakdown of Novak’s rally length at the 2018 US Open.

Remember all those long rallies Novak played against John Millman, Joao Sousa and Marton Fucsovics? Some pretty spectacular tennis right there! But even with slow New York hard courts, in heavy (humid) conditions, the No. 1 rally length that drove Novak to the title was the 0-4 shot rally length.

The First 4 Shots include

This is your road map. As much as you want to go to the practice court and grind into oblivion, you will ALWAYS play more short points than long ones. You will always make more errors early in the point than when it reaches double digits.

Novak is on a tear. Wimbledon, Cincinnati and the US Open don’t just fall into your lap. A lot of things need to come together to have such spectacular success.

I just gave you five. A little look into the window of a champion. 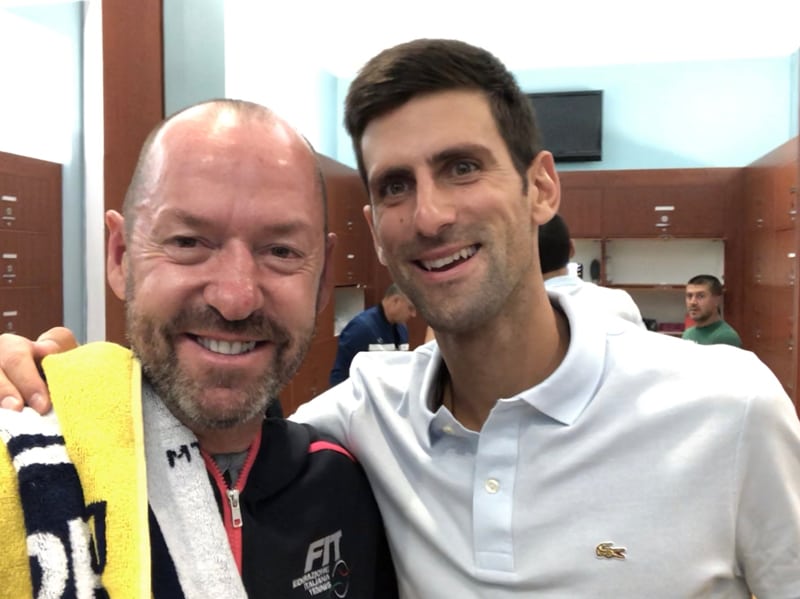 For a deeper analysis of the massive impact rally length has on winning a match, I highly recommend THE FIRST 4 SHOTS. Click HERE for more information about this tennis strategy product, focused on the importance of the start of the rally.