Ostapenko double faults her way out of Roland Garros 2018

Below is an outline of Ostapenko’s woes in Set 1.

In GAMEPLAN, I extensively cover just how prevalent and toxic double faults are – particularly in the women’s game. The following areas specific to double faults are examined in detail. It’s critical information for coaches and players at all levels of our sport.

In the 2017 Roland Garros final against Simona Halep, I tweeted about her 2nd serve problems.

Halep holds for 4-3. Ostapenko needs to be a touch more selective when to go all out. High balls = errors. 2nd serve a little rough. i#RG17 pic.twitter.com/uI03LXE0pN

In THREE service games, she double-faulted on the last point of the game to gift Kozlova the break. Can’t happen.

Here are my thoughts on Ostapenko’s double fault dilemma.

1 The Problem Is Upstream

Ostapenko is 20 years old. Her serve technique is a major problem. It’s not smooth. It’s not repeatable under pressure. It stops and starts and pauses and drops and….

When she was much younger (a decade ago), her serve technique was in the developing stages. That was the time to make sure the arms flowed together, the energy went up, the backswing was smooth, and contact was high. For whatever reason, that didn’t appear to happen, or it didn’t stick. We saw the problem yesterday at Roland Garros, but the reality is that the problem was really a decade ago.

COACHES – It is soooo important that we work a lot more than we normally do with young players on their serve technique. Forehand and backhands dominate the practice court. There is an overkill of rallying. The serve gets left behind. Technique gets sloppy. Double faults abound.

Here are some thoughts about her serve technique. The main thing to understand is that the various segments of her serve motion do not flow. They appear in isolation and are not connected to other areas.

Picture 1 – Eyes Up Too Soon The racket has not yet moved, but Ostapenko’s eyes are already looking up at the sky, to the right of the court. At this stage, her eyes need to be looking square in the direction of the returner. As the toss come up in front of her, her vision should move from long (the opponent) to short (the ball). There is no advantage to looking up and to the side so early in the motion. It’s the start of the chain of disconnect. The problem here is the immediate lifting of her right arm. Instead of naturally falling and letting gravity do its work, she tightens her right arm and raises her racket. Also look at her mouth. It’s wide open. Lots of early stress in the motion.

3. Racket Up Then Down Ostapenko initially raises her racket up to the yellow line and then drops it down below the yellow line (pic above). This is the reverse order. It should drop then raise, but it raises then drops. It’s all out of synch. It’s disjointed.

The above pic is a balance comparison between Ostapenko on the left and Alize Cornet on the right, who also played yesterday at Roland Garros. The Cornet pic is taken slightly earlier in the motion, but that’s all I had before the camera cut to a full-court shot. It’s clear to see that Cornet is balance and straight. It’s also clear to see that Ostapenko is falling over.

Double faults are the worst way to lose a point. They are toxic, and heavily contribute to losing a match – especially when you commit 13 in two sets!

In GAMEPLAN, I go into depth on the overall metrics of double faults in junior tennis (U12, U14, U16, U18), US College tennis, and also on the pro tour. Here’s a sneak peak. Yesterday, Ostapenko averaged one double fault for every three second serves she hit. The women’s tour average about one out of seven, while the men are one out of 10. Roger Federer is one out of 16. It shows you just how tough it was for Ostapenko yesterday in Paris.

I see a really big problem in our sport with not enough time spent on cementing a strong service motion for juniors when they are learning the game in the 10yo – 14yo age group. If players don’t get it right at a young age, then there is a good chance it is going to fall apart under pressure a decade later (which it just did).

This is what Ostapenko said post-match in her press conference.

“I think it was a terrible day at the office for me. I mean, in general, I played maybe like 20% of what I can play. Make 50 unforced errors and so many double faults. Like, couldn’t serve today,” Ostapenko said.

“I mean, of course, when I went on court today, I was like – I had this unbelievable pressure. I felt that I’m not myself today on the court,” she said.

From a young age, serve technique needs to be:

Then it has a chance of holding up under whatever pressure it runs in to.

For a deeper analysis of double faults and other elements of the Player Development Pathway, I highly recommend GAMEPLAN.

Click HERE for more information about this tennis strategy product, focused on the Player Development Pathway from juniors to college to the professional tour.

For a 20% discount, enter coupon code RG2018 at checkout. It’s good during the tournament. 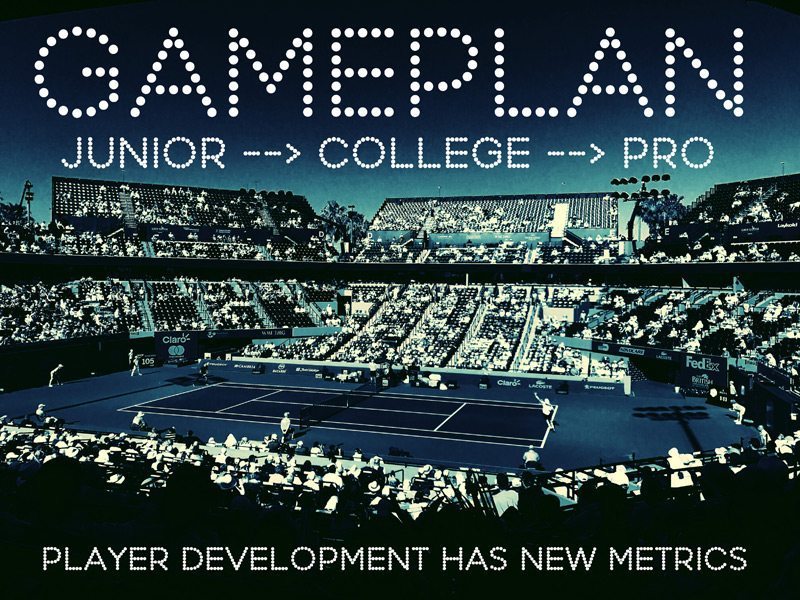